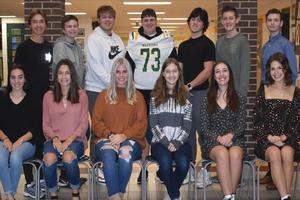 (11-8-21) Students excel inside and outside the classroom

Penn-Trafford High School honored the following students in Quarter 1 of the 2021-2022 school year as "Noble Warriors":

The Noble Warrior awards are presented once per quarter to Penn-Trafford High School students who have excelled inside and/or outside of the classroom.  Students were nominated by teachers from each department, who joined the winners and their families for breakfast before school.