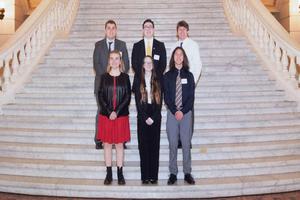 Penn-Trafford High School's Academic Quiz Team competed at the Pennsylvania Academic Quiz Competition in Harrisburg on April 29th.  They were met by 22 other teams from counties across the entire state.  Penn-Trafford faced the toughest competition of the year and ultimately finished the competition in a tie for 10th place. "The best of the best from across the state were at the competition,” said academic advisor Mrs. Wukich. “We fared well in every match."


Between matches, the students enjoyed a personal tour of the State Capitol Building by Representative Dunbar's staff. The tour included the Senate Library, the House Caucus Room, and the House and Senate floors.  They also visited the Governor's quarters and enjoyed learning about the history of the capital.