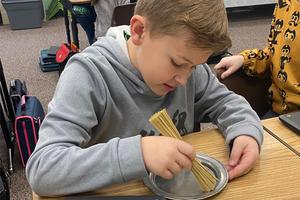 The fifth-graders in Mrs. Hawk's Social Studies classes at Sunrise Estates Elementary School had the opportunity to examine and learn from an educational kit provided by the Fort Ligonier Museum during their unit of study on the French and Indian War.


The students enjoyed participating in a ‘Reader's Theatre’ during which they acted out the role of important people during that time period.  The class was also able to examine various artifacts that were used by the soldiers at Fort Ligonier to learn about their daily life. Grace Mouto-Dongmo (left) played the role of a French soldier and read her lines in French since she is a native French speaker;  Carter Griffith and Emma Salsgiver displayed the best British accents as they read their lines