PTHS Marching Band
The Penn-Trafford Band is marching their way into the 2022 season with zeal. Seniors were recognized after a very productive band camp. The summer ended with some fun at Kennywood and a performance in the Fall Fantasy Parade!  Be sure to see this season’s show at the first home competition on September 10, 2022 at Penn-Trafford High School!
It is that time of year again… Band Camp!
The 2022 Penn-Trafford Marching Band has been busy preparing the 2022 show and want to share what they have learned.  All are invited to the PTHS field on Friday, August 5, 2022 at 6:30 PM to watch the PTMB perform in their annual Preview Show. The band loves an audience! 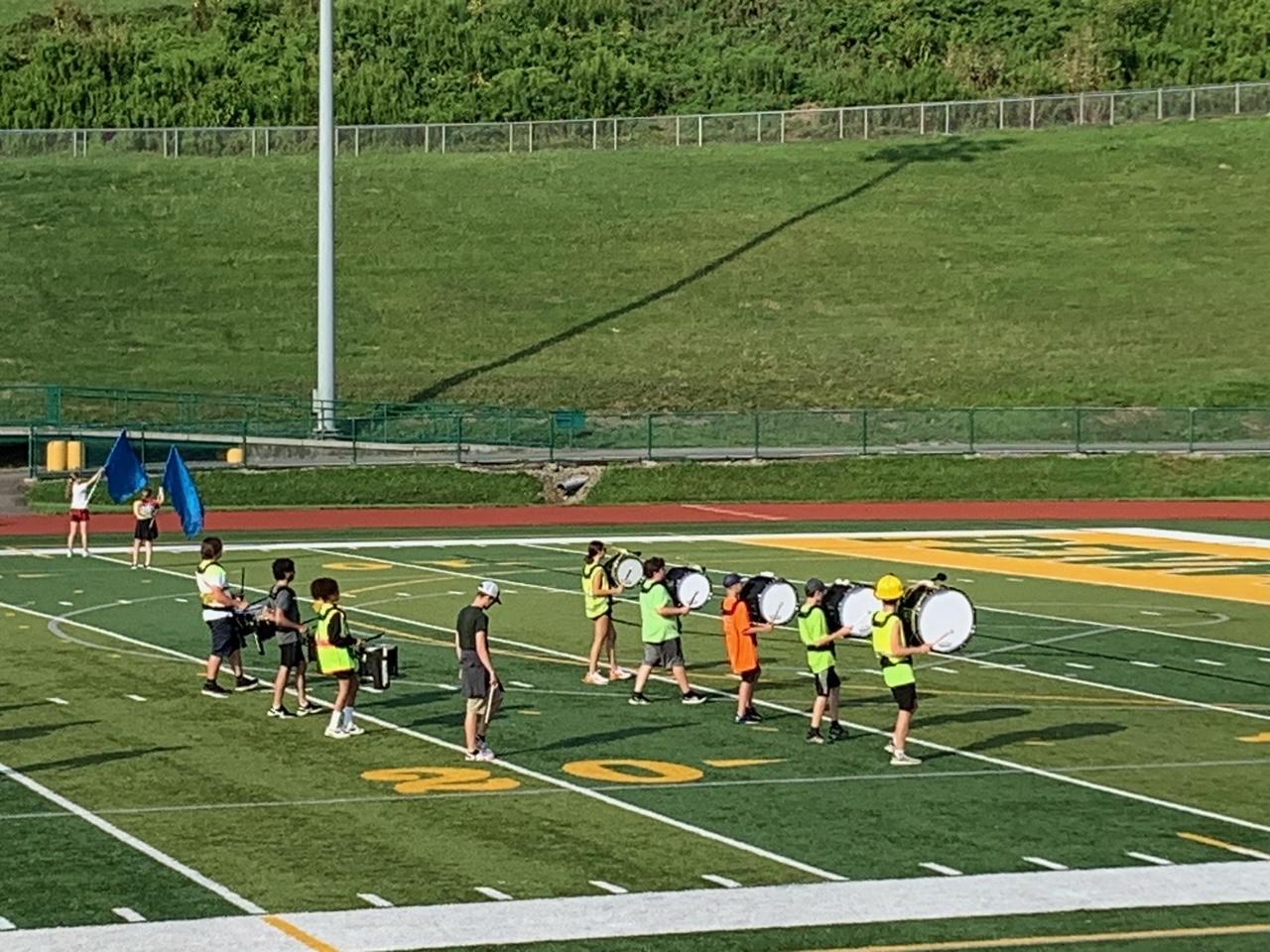 Elementary Summer Band Camp was a Huge Success
Summer Show Choir Camp
August 10 - 12
For Penn-Trafford students entering Grades 4 - 9
Information and signups:
https://sites.google.com/penntrafford.org/2021-summer-choir-camp/home
2021 - 2022
Penn-Trafford Music Department
Archived Events Below
PTHS Bands Perform Spring Concert
The Penn-Trafford Indoor Percussion, Concert, and Jazz Ensembles performed in a concert under the direction of Mr. David Cornelius at the PT High School Auditorium this weekend. The concert featured alumni musicians and conductors, Dr. Timothy Winfield (2001), Mrs. Kelly Palmer Cornelius (1992), and Mr. Carl Miller (1985).  PT’s very own Coach Thomas Ruane conducted “On to Victory” as well.  Student compositions and arrangements by Nicholas McCracken and Jude Mulhern were performed and the Seniors of the Class of 2022 were recognized. The evening was a wonderful celebration of music at Penn-Trafford!
TMS Chorus Performs Superb Spring Chorus Concert
It was a night to remember at Trafford Middle School on Thursday, April 21, 2022 as the TMS Chorus performed their annual spring chorus concert.  This year's theme was Teachers' Favorites, a celebration of our TMS teachers’ favorite songs through the years.

Our TMS teachers were invited to review past programs, dating back to 2004, and choose their favorite songs that the chorus has performed.  TMS Chorus Director, Mrs. Rumbaugh and the sixth, seventh, and eighth grade chorus members were very excited to present this show as a dedication to our staff at TMS and to thank them for all their care and hard work they provide for them on a daily basis. There’s no better place to be than Trafford Middle School!

PT Percussion Ensemble Takes Silver
PT Concert Percussion Ensemble just earned the PSCA (Percussion Scholastic Class A) silver medals for their performance in the WGI Percussion World Championship in Dayton, OH!  This is quite an accomplishment as they competed against percussion ensembles from around the country! Congratulations to our high school percussionists!
Join HS Marching Band!  Flyers attached below:

[Harrison City, PA, April 6, 2022] The Penn-Trafford Indoor Percussion earned first place in the TRWEA Championship at Kiski on Saturday, April 2 to continue its very successful season. The group will compete in the Winter Guard International World Championships in Dayton, Ohio on April 21-23. 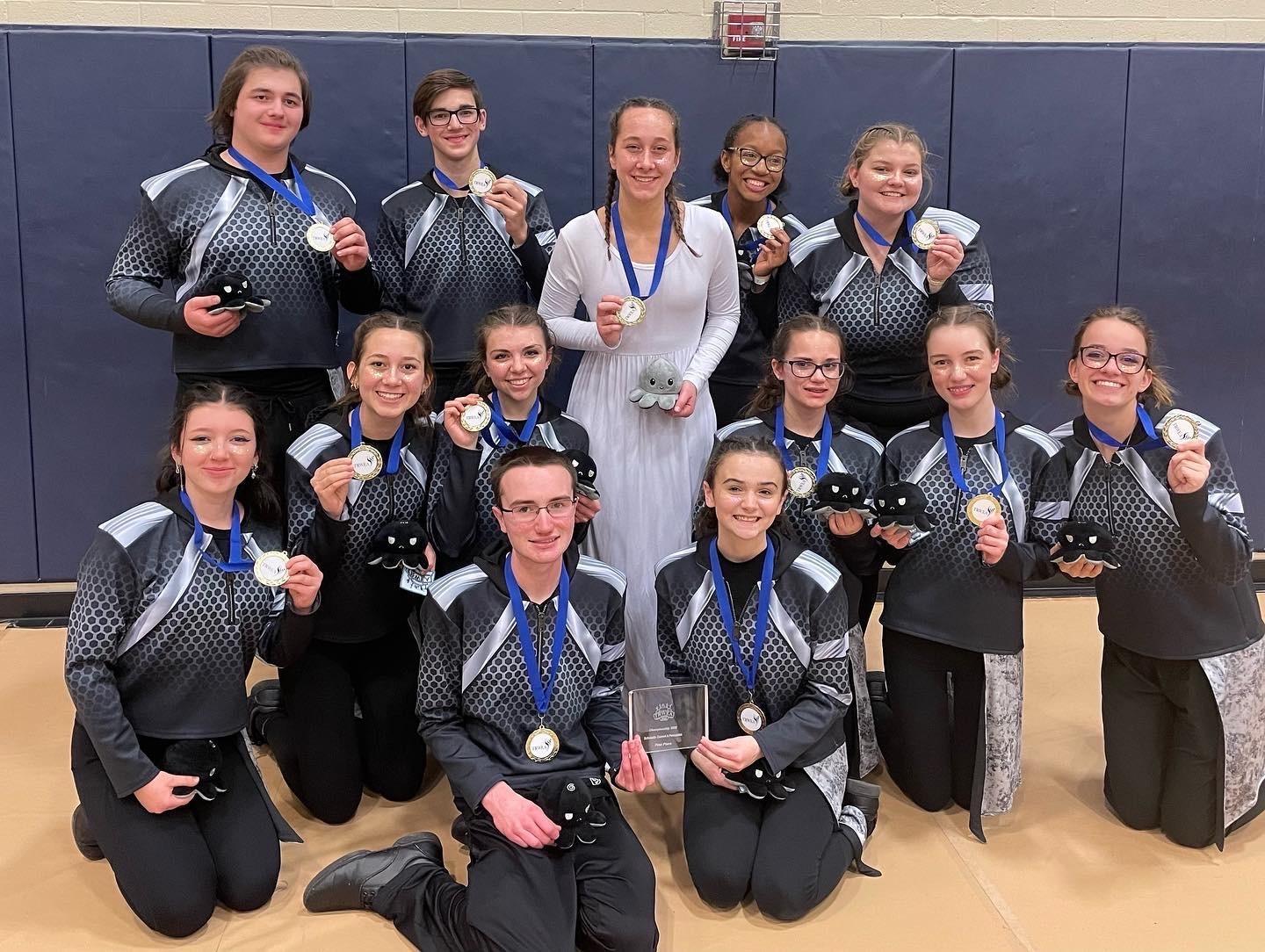 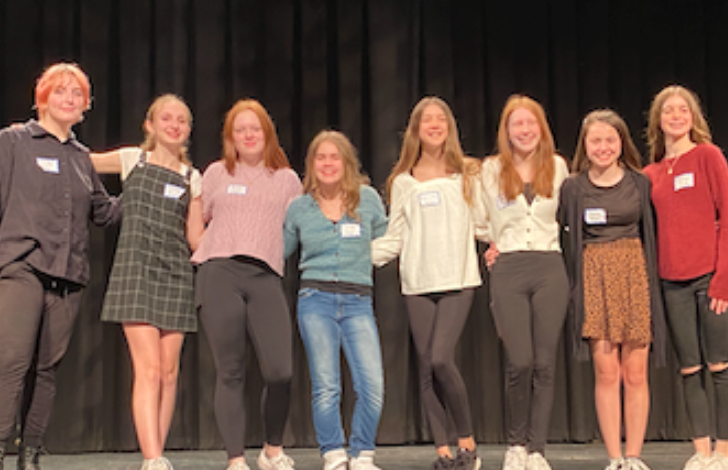 
Aurora Hornyak, Amelia Lightner, Abigail Reech, Jordyn Sauter, and MacKenzie Hamilton represented Trafford Middle School at the event which took place at Greater Latrobe High School.  Students from all over Westmoreland County were selected to participate in the all-day festival, which concluded with an evening concert.


“The sixth-grade chorus members worked hard for several months, learning an entire repertoire of music ahead of the all-day event,” said chorus director, Mrs. Rumbaugh.  “I was proud of the girls’ efforts and was to see all their hard work come to fruition at the festival’s evening concert.” 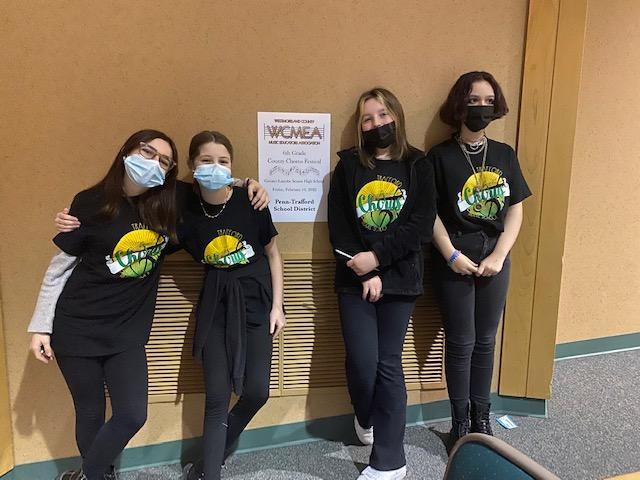 The Westmoreland County Gifted Coalition held its 14th-annual  Piano and Strings Competition on February 14. The event took place at Trafford Middle School and was judged by the school’s music teacher, Mrs. Renee Rumbaugh. 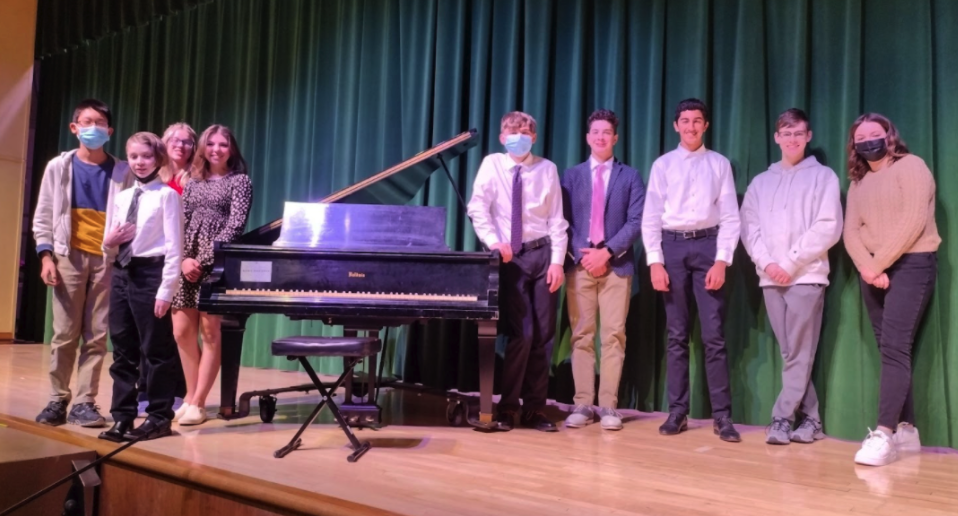 Angelina DiMatteo, Teresa Campbell-Steffens, and Nicholas Freilino performed with 115 other students from the PMEA District 1 East.  Mr. Mark Surovchak, director of bands at Belle Vernon High School hosted the festival. The guest conductor of the ensemble was Dr. Jason Worzbyt, who is the professor of bassoon and Associate Director of Bands at Indiana University of Pennsylvania. 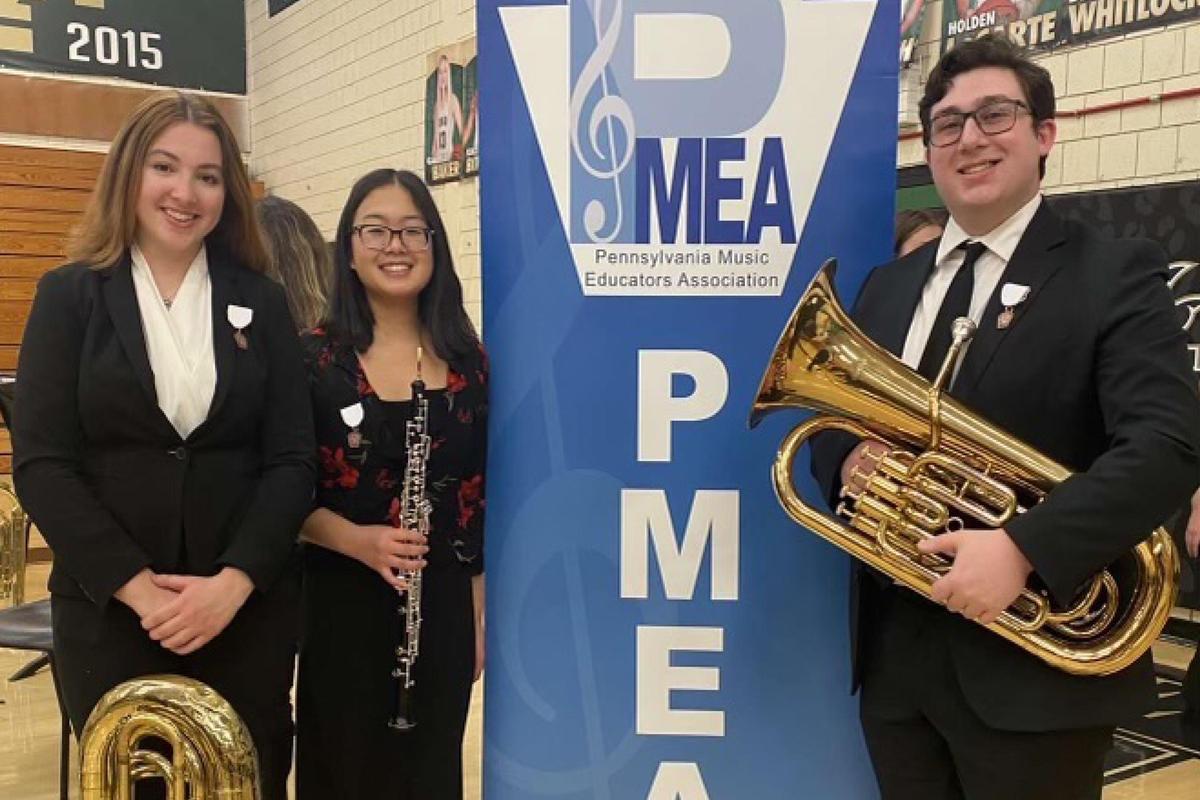 Penn-Trafford students, parents, and chaperones returned from a trip to Disney World in the early hours of January 7th after a magical week of performances, workshops, and fun.

The Penn-Trafford High School Marching Band had the honor of parading down Main Street USA in Walt Disney World's Magic Kingdom.  Led by Director David Cornelius and Drum Major Nicholas Freilino, the band performed the Washington Post March and the Mickey Mouse March.  The students also had the opportunity to participate in the "You're Instrumental" workshop, during which they recorded a medley from "Aladdin", which was added to the animated scenes of the movie.

This trip was made possible by the tireless fundraising of the students and the strong community support.  “The marching band would like to thank all of the members of the Penn-Trafford community who have supported the monthly sub-sales,” commented Mr. Cornelius.  “Your support enabled the students to have a wonderful experience in Florida.”

“We would like to thank the students, parents, teachers, administrators, and school board members who made this once-in-a-lifetime experience a reality,” added Mr. Fox.

The Penn-Trafford School District had ten students selected for the Westmoreland County Junior High Band Festival. The students performed a concert for the public on Friday, January 7th at Norwin Middle School along with students from other schools around the county. 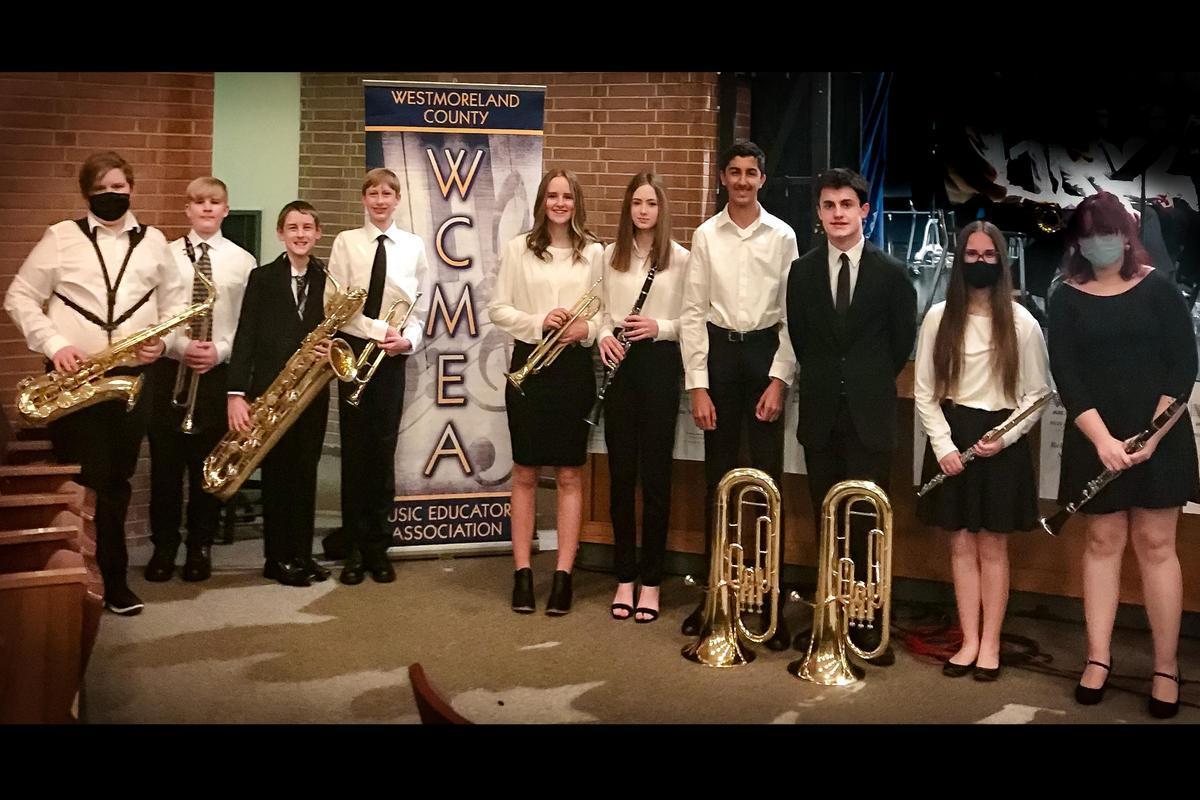 Three students from Penn Middle School were selected to participate in the Seton Hill Honors Bands. 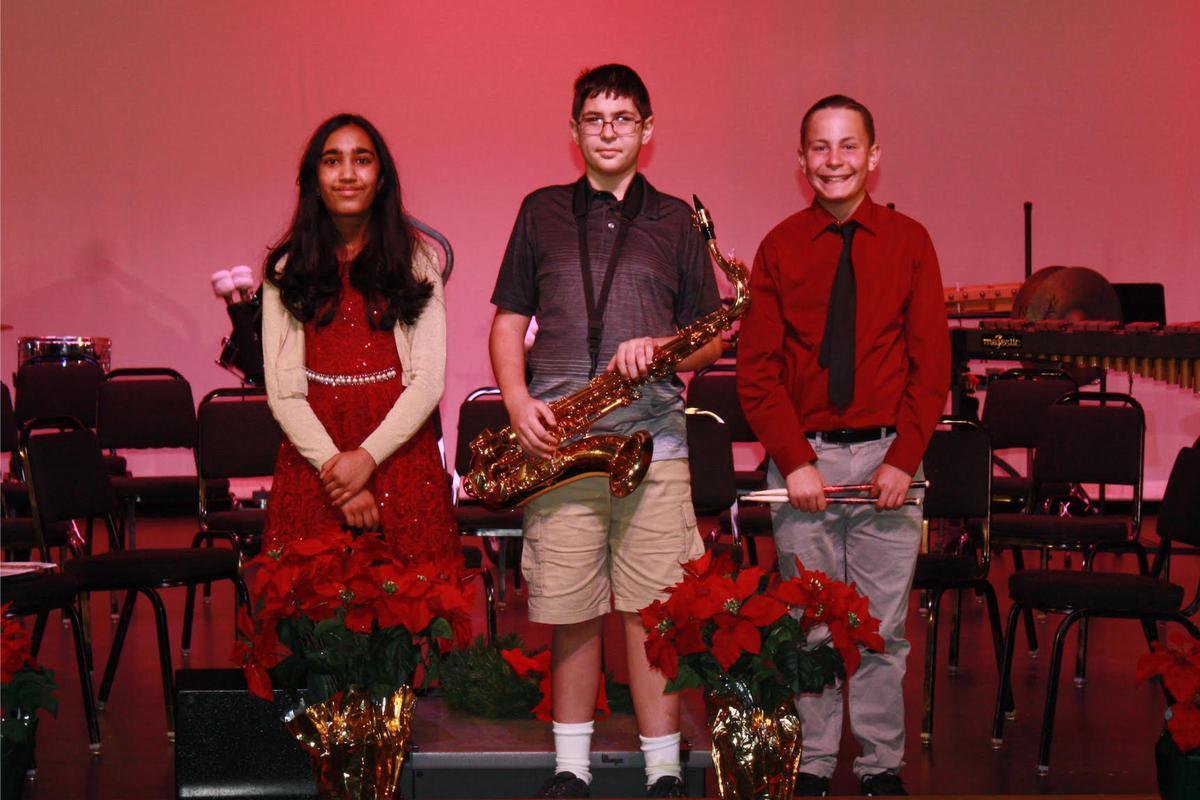 (12-21-21) IUP gathers musicians from the region, including a group from PT, for the holiday concert

TubaChristmas concerts take place all over the world and are held to celebrate instruments in the tuba family. 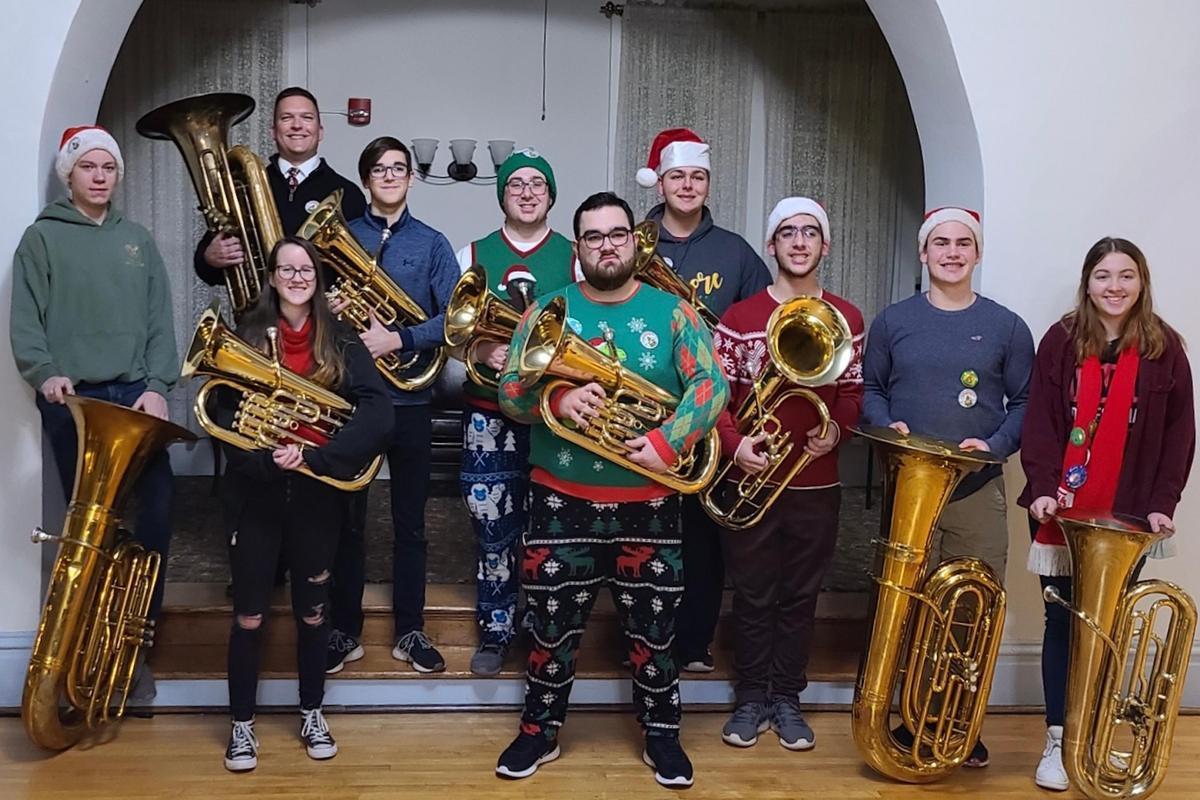 (Trafford, PA: December 21, 2021)  The Trafford Middle School Eighth Grade Chorus recorded holiday favorites to perform at the Penn-Trafford High School Make-a-Wish Telethon, held on December 21, 2021.  The eighth grade chorus performed Let There Be Peace on Earth and Once Upon a December.  The entire Trafford Middle School Chorus raised $339 at their annual holiday concert to donate to the telethon.  Mrs. Rumbaugh is so proud of the generosity of the Trafford community. 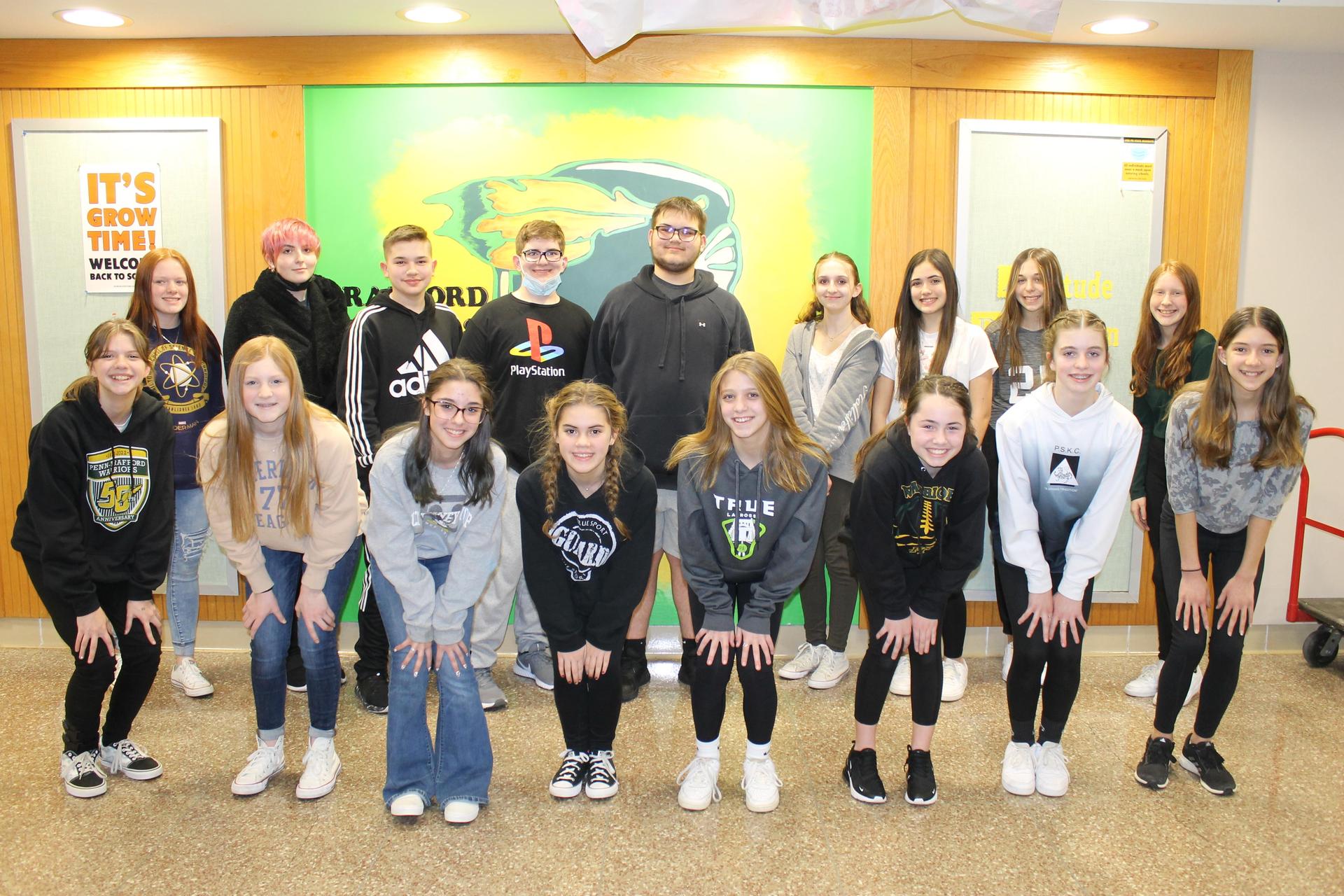 Penn Middle School’s 6th and 7th/8th-grade choruses performed their holiday concerts in early December.  The groups performed songs including "A Charlie Brown Christmas," "Dashing Through the Snow," "My Favorite Things," and "Silent Night."

For some extra fun, the students played maracas in "Feliz Navidad," kazoos in "Theme from Elf," and used flameless candles for "Light."  They also danced along to "The Christmas Tree Feud" and "Let it Snow."

The choruses are directed by Miss Taylor Powell, a music teacher at the school.

[Trafford, PA, December 14, 2021] In the weeks leading up to Christmas, the Trafford Middle School Chorus set its sights on spreading cheer to local nursing home residents.  The students wrote letters, made holiday crafts, and sent recordings of their holiday concert in hopes of raising the spirits of those who are confined during the holidays.

Four students from Penn-Trafford High School were selected to perform in the Senior High County Band, which took place at Yough Intermediate Middle School on December 3, 2021.  The concert was sponsored by the Westmoreland County Music Educators Association. 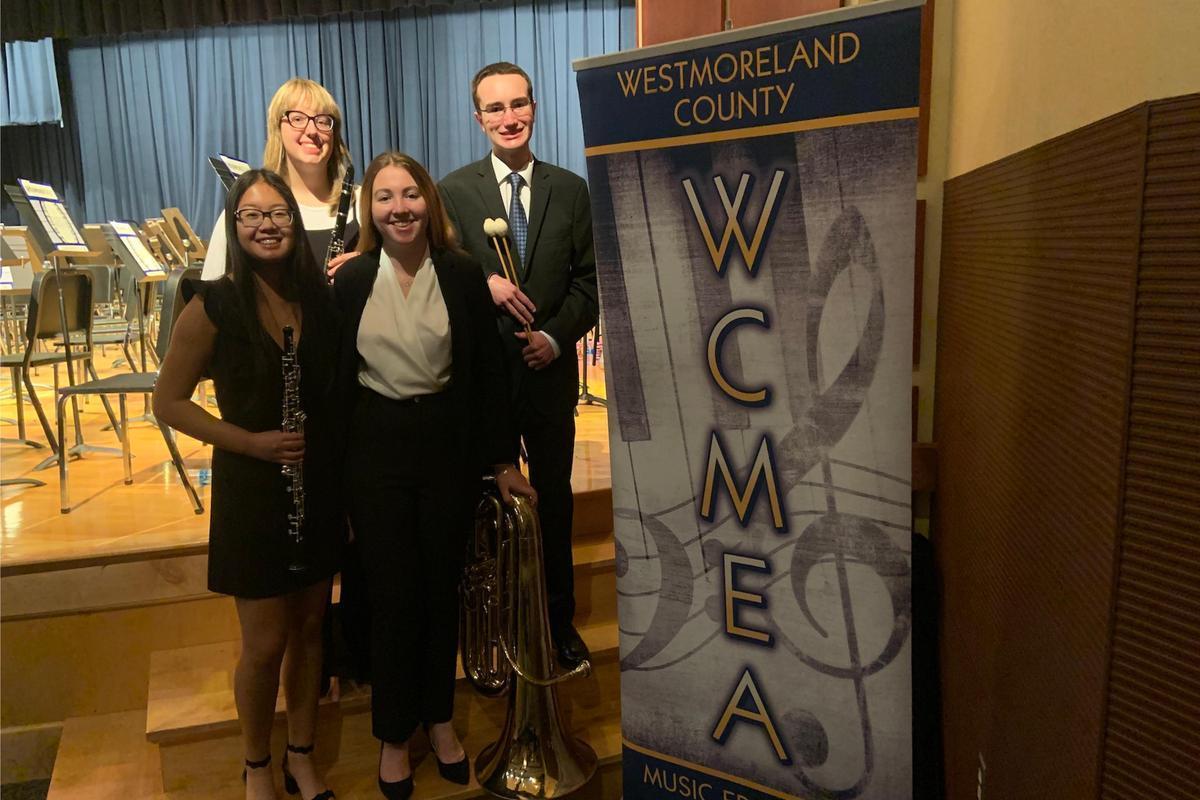 Sounds of the Season Heard at Penn Middle School

The students also performed for the students and staff of Penn Middle School on Friday, December 3rd. 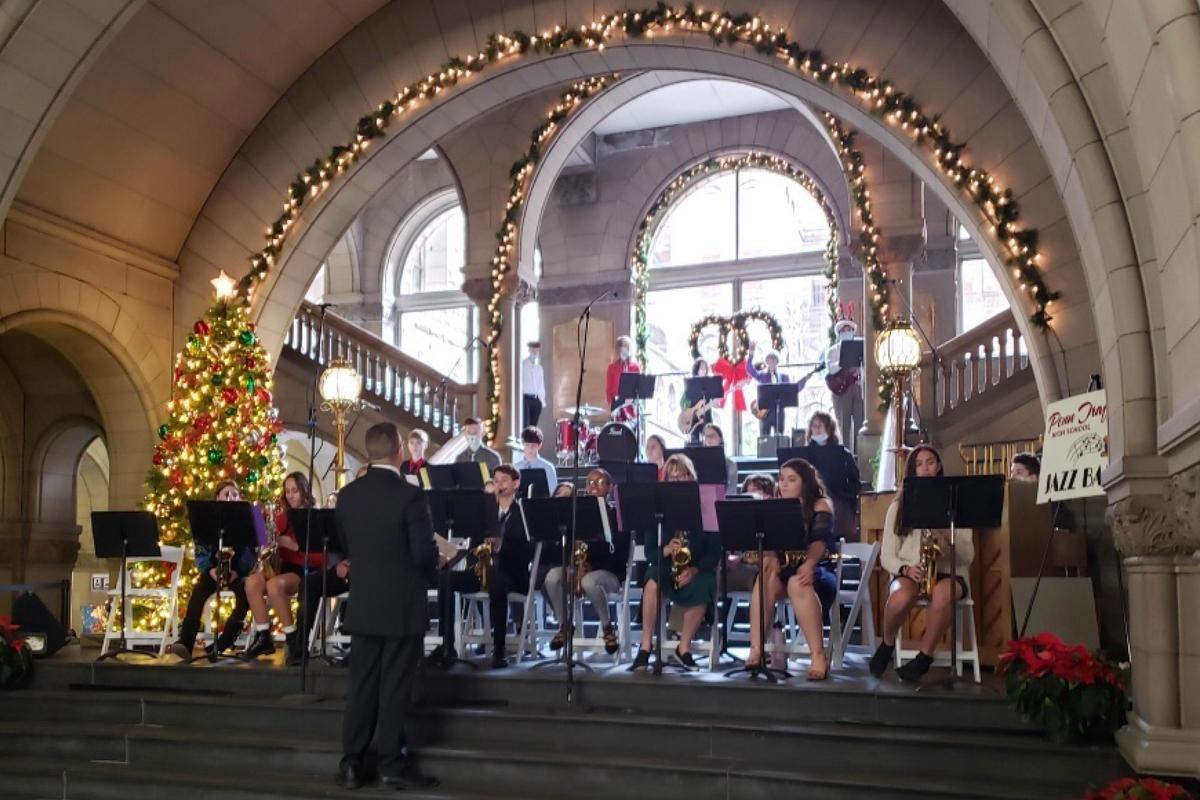 [Trafford, PA, November 18, 2021]  The Trafford Middle School Eighth Grade Chorus performed at a community service for Veterans Day at Trafford Veterans Memorial Park on Thursday, November 11, 2021.  The students performed The Star-Spangled Banner, Lean on Me, Let There Be Peace on Earth, and God Bless the U.S.A.


“The chorus members were excited to share their music with the veterans and community members in attendance,” commented chorus director Mrs. Renee Rumbaugh.  “They were honored to perform at such an important event in the Trafford community.” 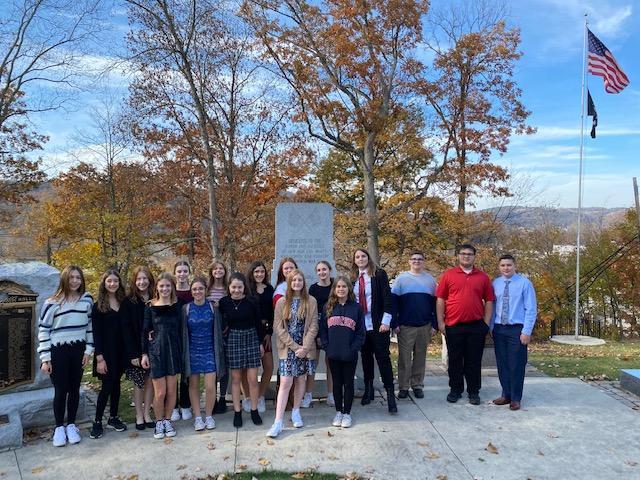 The Region 8 ‘Tournament of Bands’ Championship show took place at Penn-Trafford’s Warrior Stadium on Saturday, October 23. The Penn-Trafford Marching Band secured first place as the 2021 Group 3 Open Champions, and once again received their highest score of this season.

Next up, Penn-Trafford will travel to Dauphin County to compete in the Tournament of Bands Atlantic Coast Championship on November 7th.

The Penn-Trafford Marching Band competed in a Tournament of Bands competition at McKeesport High School on Saturday, October 16. Penn-Trafford earned a first-place trophy for its class and continued to improve its score. 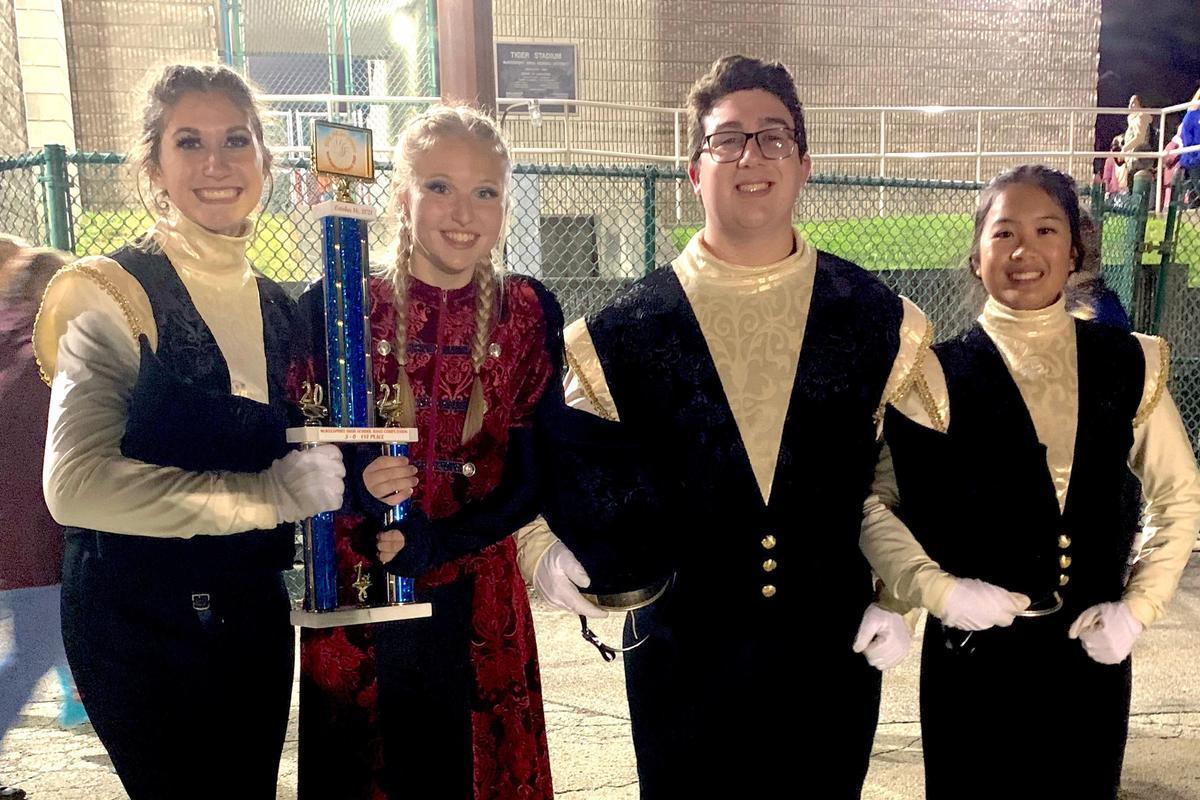 
[Trafford, PA, October 6, 2021]   The Trafford Middle School Chorus, combined with some of its ninth and tenth grade former members, performed at the Westmoreland Arts and Heritage Festival at Twin Lakes Park on October 2.  This marked the group’s first ‘live’ performance since December 2019 (before COVID).

The chorus performed three medleys - The Little Mermaid, Toy Story, and Moana.  The group also had the opportunity to enjoy the other festival events as well as dinner together following their performance.

“This was such a wonderful experience for the students!” said Chorus Director Mrs. Rumbaugh.  “It was so emotional to hear them singing live again.  They sounded fantastic and I was so proud of them!”

Bands from PTHS, PMS, and TMS perform together at football game

Penn-Trafford’s Middle School Bands had the honor of performing alongside the PTHS marching band on Friday, September 17.  The groups took to the football field during halftime of the PT vs. Peter’s Township football game.

Together, the bands performed “Paint it Black," "Sweet Caroline," and "Warriors."

"All bands did a phenomenal job working together, rehearsing, and performing at halftime,” commented the Trafford Middle School band director, Mrs. Riston.  “I’d like to thank all the band members for their hard work and dedication, and Mr. Cornelius for arranging everything."

In addition to entertaining at Warrior football games, the Penn-Trafford High School marching band performs at various competitions and festivals throughout the year.  The group recently competed at East Allegheny (September 25) and Tyrone, PA (October 2) and is very pleased with the improvements shown after each performance. 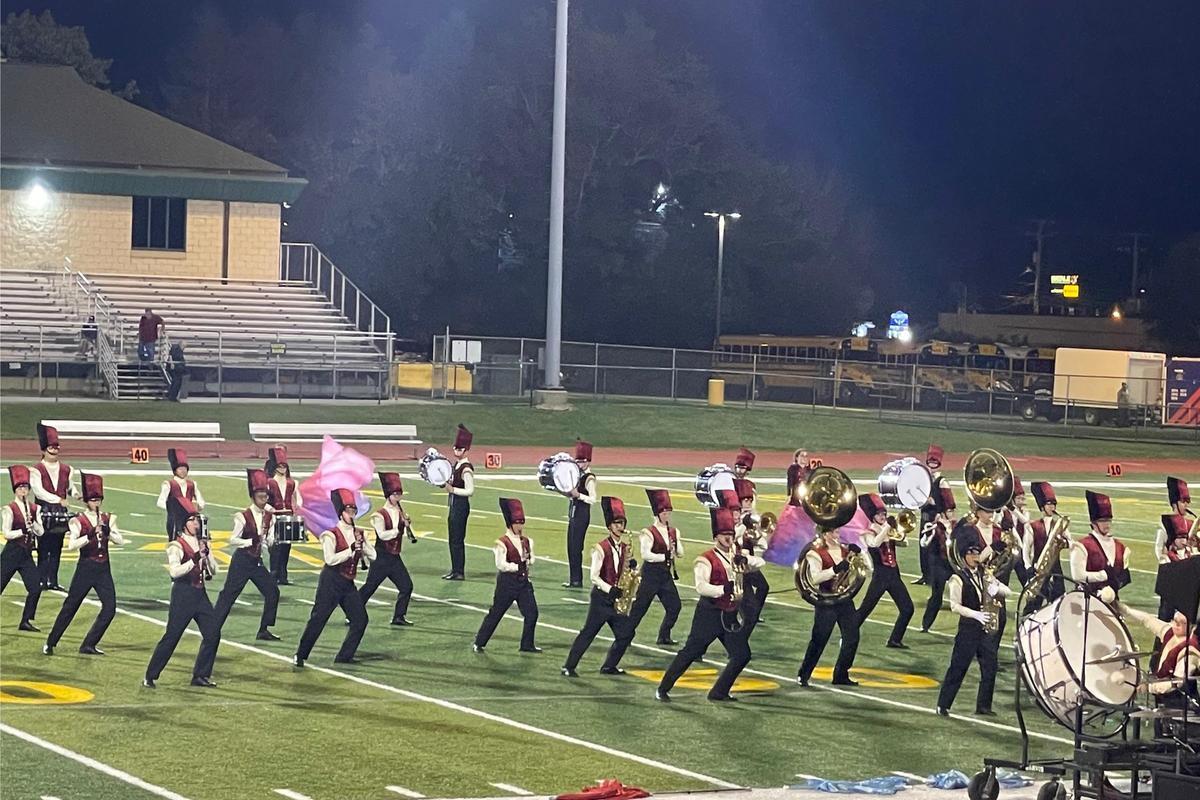 The Penn-Trafford School District held a band camp at Penn Middle School during July for incoming 4th, 5th, and 6th graders. 4th-grade students met in small groups to learn how to properly assemble their instruments and make their first sounds. 5th and 6th graders had the opportunity to meet as an ensemble to continue developing their instrument skills and work on concert repertoire.

The Penn-Trafford High School Marching Band performed at Kennywood Park on Saturday, August 14.  As part of the park’s “Fall Fantasy Parade” attraction, the band joined over 100 other bands from Southwestern Pennsylvania, West Virginia, and Ohio who performed in the month-long celebration.

It’s summertime, and that means the new band season has begun.  Members of the Penn-Trafford High School marching band are working hard to learn the new music and routines, and improve their skills.

Click on the links below for more information about our programs: